DVD&CD 21 trombones in the 21st century 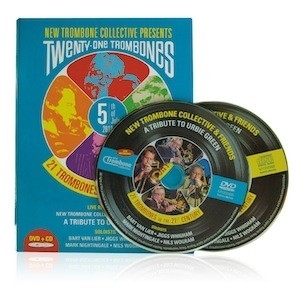 1967 Jazz Legend Urbie Green has a dream: an ensemble of twenty trombonists, he plays solo as number twenty-one. He writes history with the record Twenty-one Trombones: a constant source of inspiration for trombonists worldwide.

2010 New Trombone Collective think it is time for the next chapter. They organize the concert Twenty-One Trombones in the 21st Century. Monday, July 5th: club Off_corso bursts at its seems. The Urbie standards are being performed and four new compositions for the large ensemble played by Jiggs Whigham, Bart van Lier, Mark Nightingale, Nils Wogram and the twenty trombonists from the New Trombone Collective & Friends. The evening ends with a steamy jam session.

Four cameras capture the enjoyment of playing, the atmosphere and the dynamics of the concert.The result can be found on the DVD / CD 21 Trombones in the 21st Century. On top of that you find a documentary about the Urbie Green project. You are not only witnessing the concentrated rehearsal process, but also of the investigation into the secret of Urbie Green. Includes an interview with the living legend himself and players around him.

If he walked into my life NTC & Friends / Jiggs Whigham

Interviews with Urbie Green and others